A History of Hartshorne

In the late 1800’s, the lands of Indian Territory were still wild and rugged. In 1871, a large group of pioneers settled in the area around Hartshorne and became the first white settlers in the area. Within four years, this settlement grew into a small town. The people who settled here were as rugged as the land itself, and brawls were a common sight.

As railroads moved into Indian Territory, the white man followed, but it wasn’t until an enterprising Civil War veteran moved into the area that the town of Hartshorne really boomed. James Jackson “J. J.” McAlester saw promise in Indian Territory. After the Civil War, he met a man who had surveyed the territory before the war. The man showed McAlester a location that was abundant with coal and even provided the exact locations of the veins. Taking no chances, McAlester quickly purchased the land and a short time later began his coal mining operations. This would begin the reign of coal in Oklahoma, and Hartshorne being only a few miles away, reaped the rewards.

The opening of the coal fields drew thousands of immigrants into the area. Dr. Charles Hartshorne, a wealthy businessman from Pennsylvania, was caught up in the massive migrations.

A short time before Dr. Hartshorne came to Indian Territory, a group of Pennsylvania coal operators and financiers incorporated the Choctaw, Coal and Railway Company. This company, founded in 1887 could mine and market coal, but could also build and operate railroads at the same time. Two years after the founding of this company, Dr. Hartshorne became president. The company was ambitiously laying tracks eastward into Indian Territory and towards J. J. McAlester’s coal operations. With these tracks in place, it was now possible for coal mined in Hartshorne to be shipped all across the country.

During the time that McAlester was experiencing a coal mining boom, Hartshorne became a major economic force in the area. With abundant coal in the region, and easy transportation through a trolley system to McAlester, Hartshorne was both a vibrant and ever-expanding community of immigrants. In fact, Hartshorne could boast of the largest and best equipped coal mine in the state of Oklahoma. The Rock Island No. 8 featured advancements in the coal mining process that had never been seen before.

From incorporation of the town on March 1, 1900, until the mid-1920’s, Hartshorne remained a vivacious, bustling coal-mining town. Productivity began to decline in 1922, when oil took over many of the functions that coal once had. As coal mines began to produce less coal, people began to move out of the area in search of better jobs. The great depression finally put an end to the coal era, as well as the glory days of historic Hartshorne.

For baseball fans and historians, Hartshorne was the home of Warren Spahn after his retirement from baseball. His Diamond Star Ranch is still on Warren Spahn Rd, south of town. In 1999, the Oklahoma Sports Museum in Guthrie began presenting the Warren Spahn Award to the top left handed pitcher in Major League Baseball.  The original nine foot bronze statue honoring Warren Spahn began its existence at the Oklahoma Territorial Museum in Guthrie, was moved to the Oklahoma Sports Hall of Fame in Oklahoma City, and was then donated to Hartshorne Public School in 2018.  There is a matching statue honoring Spahn at Turner Field in Atlanta. The Hall of Fame pitcher passed away on, November 4, 2003, and was laid to rest at Elmwood Cemetery in Hartshorne. 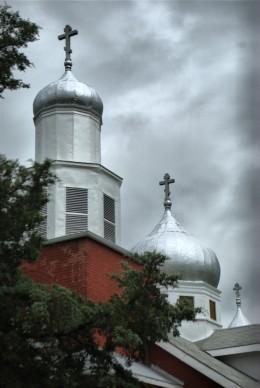 Through the years, Hartshorne has changed in many ways, but the pride in a rich heritage has remained. As industries have faded, Hartshorne has shown the resilient nature of its roots. One of the area’s most unique landmarks is the Sts. Cyril & Methodius Russian Orthodox Church on what is known to locals as “Russian Hill.” This famous structure was built in the early-1900’s (approx. 1917) and stands today as a historic site and reminder of the immigrants that came to this community in search of a better life.

In the past few years, the city of Hartshorne has made a great comeback. New businesses have chosen Hartshorne to expand and local businesses have grown even in slow economic times. Still, the past remains close. Visitors to Hartshorne not only receive a warm welcome, but also get a chance to reflect on times gone by.

For those looking for a unique place to visit and learn about coal mining in Oklahoma, Hartshorne provides an excellent glimpse into that history.

The organized school began in 1902 to serve the children of the coal mining community. Today, Hartshorne Public Schools educates over 800 students from the surrounding area and Jones Academy. Jones Academy has been in the Hartshorne area since 1891 and services Native American students from around the country with over 25 different tribes represented. These students attend grades 1-6 on site, while students in grades 7-12 attend Hartshorne Public Schools. Jones Academy is presently part of the Choctaw Nation of Oklahoma and more information can be found at www.jonesacademy.org.

The school mascot is representative of the industry that brought this small community to life. Today, the Miners of Hartshorne labor for academic achievement, excellence in the arts, and athletic greatness. From the rugged hills of southeastern Oklahoma came the coal that powered a nation and now those same hills produce everything from doctors, lawyers, and academics to national championship athletes. While time may pass and the faces may change, the blue-collar work ethic has never graduated and the pride has never died.